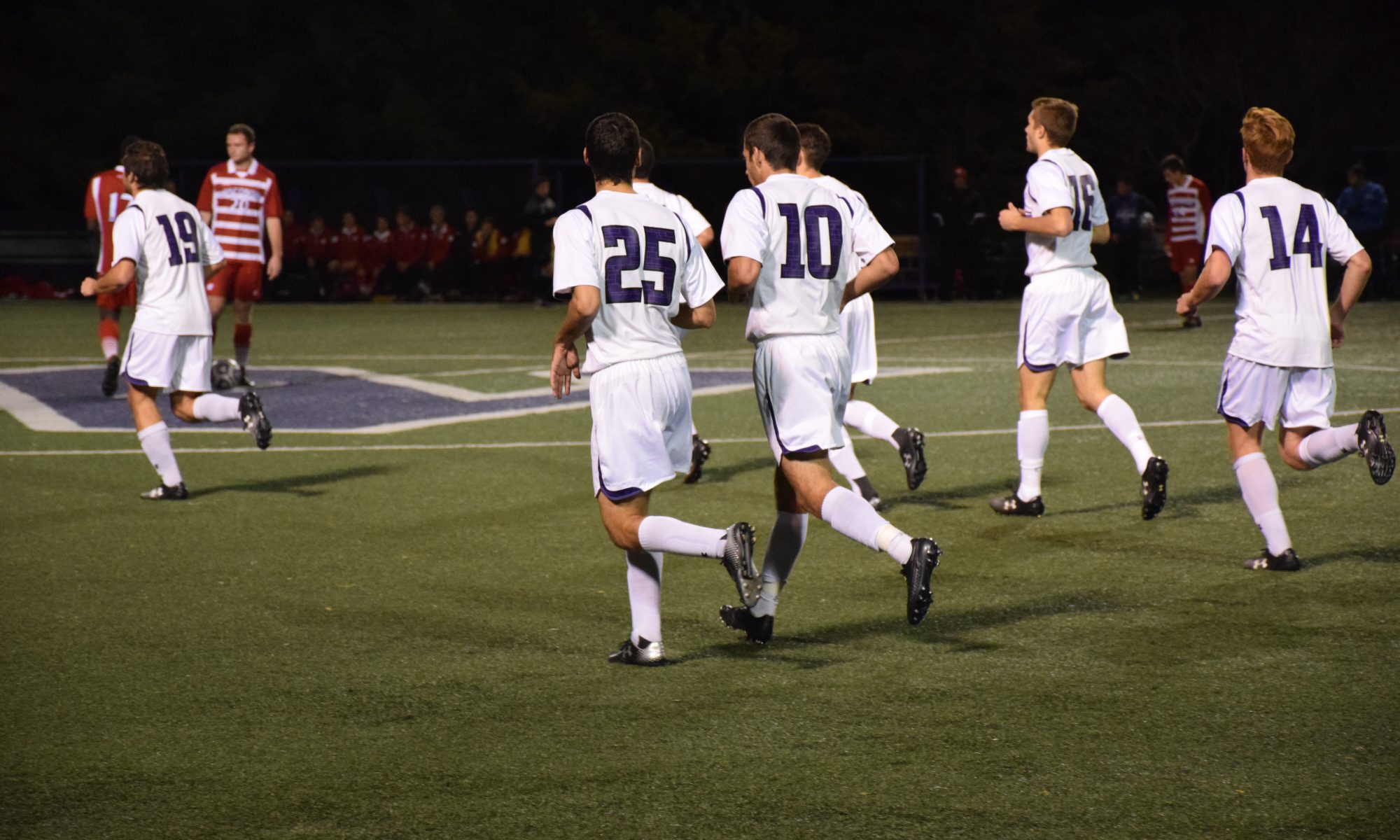 Coming into Wednesday’s match with Wisconsin (3-10-3, 0-6-1 B1G), the future of the Wildcats men’s soccer team (8-5-3, 3-1-3 B1G) was very much in flux. One thing was certain, however. They were going to the Big Ten tournament. With all nine Big ten teams in action, it was a scoreboard-watcher’s dream.

For the number one spot, the Wildcats needed a win. But they also needed some help from Rutgers, as they needed a Maryland loss as well.

At the 10′ mark, junior forward Joey Calistri notched the first Wildcats goal, off of an assist from sophomore midfielder Jeffrey Hopson. For Calistri it was his fifth goal of the season — and his first goal in exactly a month. It also was his first home goal since the Lakeside Classic on August 31.

Then they didn’t get any assistance from the Scarlet Knights, as they were defeated 3-1.

The Wildcats still had a chance for the number two seed in the tournament. But it was not in their control — they needed Michigan to notch a victory over Ohio State.

Five minutes into the second half, Calistri struck again. He knocked in a close-range goal with assists from freshman midfielder Sam Forsgren and senior midfielder Eric Weberman.

Northwestern got some more bad luck. Ohio State defeated Michigan by a score of 2-1.

But thanks to senior goalkeeper Tyler Miller being his usual strong self, saving six Badgers shot attempts en route to another blank slate, the Wildcats won by a score of 2-0, clinching the third seed in the Big Ten tournament.

The victory set the Wildcats up for a first-round matchup with the sixth-seeded Indiana Hoosiers (11-3-4, 3-3-2 B1G) on Sunday at 12 p.m. The Hoosiers, who are ranked second in the nation, will pose a strong threat to the Wildcats’ postseason hopes. 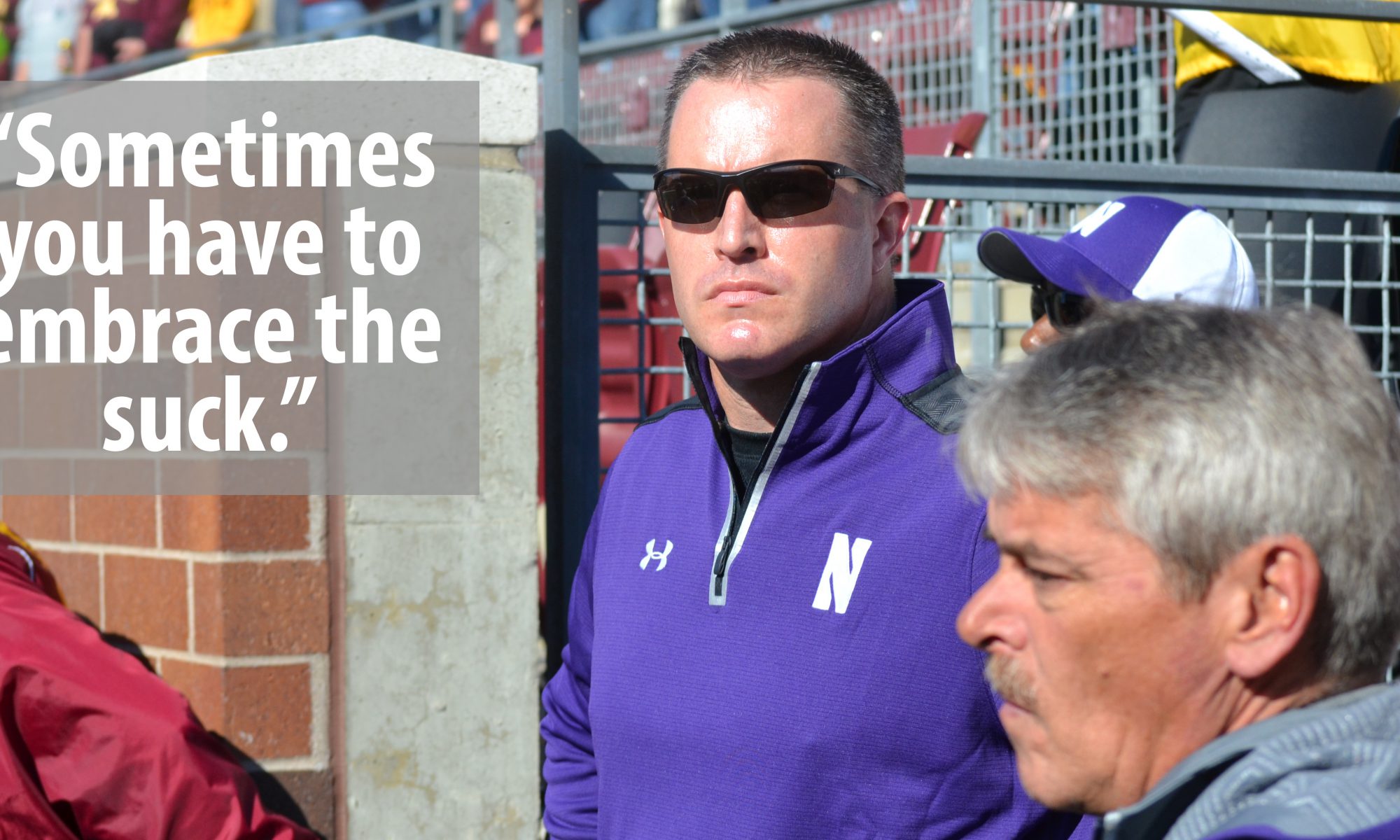 Coming off of a rough loss at Iowa, Pat Fitzgerald took to the dais on Monday to give updates on the team.

— On academics, Fitz says: “We’re best in the Big Ten by ten percentage points, so we’re doing something positive.”

— Fitz: “I don’t know if we won more than three or four one-on-one battles.” He also went on to say that there are 11 one-on-one battles over the course of the game. There were 138 plays on both sides of the ball. Not sure how they only lost by 41, if that’s the case.

— “It’s over, you move on, you flush the bad experience, and you move on.”

— Fitz on what he looks at when he evaluates his staff: “You look at the complete body of work. You look at how they develop young men.”

— On Fitz being too loyal: “I’ve never met those people. Sorry.” He really trusts people who give everything they have.

— “I see guys struggle and I get friggin’ excited about it.”

— “On a day like Saturday, you have to quickly learn from it and then forget.”

— Fitz does not anticipate Collin Ellis will play this Saturday.

— On the loss to Iowa, Fitz made a face as if he had just eaten a sour lemon that was covered in battery acid.

— “Sometimes you have to embrace the suck. … You have to use your frustration as motivation.”

— DG: “My mentality is that the game is over. … We have to get back to work tomorrow.”

— TJ: “I just want to win. I’ll do whatever it take to leave this program a winner.”

— TJ on how to improve the passing game: “We just have to make plays.”

— BV on stopping Iowa momentum: “We didn’t do a very good job … If we run it the way we were coached to do, we’ll be successful.”

— DG on Fitz postgame: “He’s honest. He didn’t sugarcoat anything. … We believe that we’re gonna turn it around because of him.”

— DG on pass rush that struggled on Saturday: “Basically upfront, we weren’t aggressive enough in our attack.”

IOWA CITY, Iowa — Despite having two weeks to prepare for their matchup against the Iowa Hawkeyes, Northwestern fell, 48-7, at Kinnick Stadium on Saturday.

Iowa (6-2, 3-1 B1G) dominated the game on both sides of the ball, outgaining Northwestern (3-5, 2-3 B1G) 483 yards to 180 and sacking quarterback Trevor Siemian five times. The senior went a woeful 8-for-18 and 64 yards before being pulled in favor of junior Zack Oliver in the fourth quarter.

Coach Pat Fitzgerald did not say if Oliver would start next week, but took some of the blame off of Siemian.

“It starts with me, it starts with our staff,” Fitzgerald said. “We gotta look at things that we can do better.”

Oliver did not fare much better than Siemian — he completed just one of his six passes for 7 yards.

Iowa took the lead less than two minutes into the game, as Johnathan Banks took the kickoff return 54 yards. A penalty on the Northwestern special teams put Iowa on the 31-yard line to start the possession.

According to Fitzgerald, that bad start led to a domino effect of poor play on both sides of the ball.

“It just looked like we got down and all of a sudden now we try to make too many things out of one play,” Fitzgerald said.

Fitzgerald and a couple players said they did not expect to play so poorly coming out of the bye week.

Safety Godwin Igwebuike said the team actually had a great week of practice and were energized prior to kickoff.

Freshman running back Justin Jackson continued to impress in Big Ten play. He had 24 carries for 96 yards, as well as a 1-yard rushing touchdown that proved to be Northwestern’s only score.

Iowa too had a good day on the ground, led by senior Mark Weisman’s three touchdowns. The Wildcats had no answer for him in the first half, and in the second half Akrum Wadley inserted himself into the conversation with 115 yards and a touchdown. The Hawkeyes averaged 4.8 yards per rush while the Wildcats averaged 2.4.

Northwestern will host the Michigan Wolverines 2:30 p.m. next Saturday.

The Iowa Hawkeyes ended this game almost as soon as it started. Johnathan Bank’s 54-yard kickoff return set the tone early and the team never looked back. The Northwestern defense did itself no favors either, as the secondary made quarterback Jake Rudock look like the Big Ten’s best quarterback, at least during the first half.

Freshman running back Justin Jackson continues to impress. He accounted for 106 of the offense’s 146 total yards.

Zack Oliver entered the game in relief of Trevor Siemian, and did not fare much better. Northwestern drops to 3-5 (2-3 B1G) with the 48-7 loss.

The ever-reliable Justin Jackson broke open a 29-yard run that took Northwestern to the Iowa 32-yard line. However, a holding penalty on offensive lineman Eric Olson negated the big play. Linebacker Travis Perry lit up quarterback Trevor Siemian the very next play for a loss of eight yards. The Wildcats’ first drive went for 10 net yards.

The Wildcats did recover a fumble a few minutes into the third. It was Iowa’s fourth fumble of the game, though their first lost.

On the next drive, an incredible one-handed catch by wide receiver Mike McHugh went for 24 yards. It positioned Northwestern at the 4-yard line but the Hawkeyes kept Northwestern out of the end zone. On fourth down, Siemian’s pass to the right corner of the end zone was broken up by linebacker Quinton Alston. Iowa took over on downs on the 1-yard line.

Score remains 38-7 in favor of Iowa going into the fourth quarter.

Running back Justin Jackson’s 1-yard run put Northwestern on the board about 40 seconds into the second quarter.

Iowa quarterback Jake Rudock continued finding receivers deep down the field. He threw his first touchdown of the game to wide receiver Tevaun Smith about seven minutes into the quarter. He went 9/13 for 185 yards.

Iowa defensive lineman Louis Trinca-Pasat continued to antagonize quarterback Trevor Siemian. He notched his third sack of the half when Siemian seemingly ran into him.

Iowa running back Mark Weisman picked up right where he left off, scoring his third touchdown of the game with under a minute left. He had 17 carries for 92 yards in the half.

The Wildcats head into halftime down 38-7 and being outgained 298 yards to 54.

Saying Northwestern started off the game horribly would be an understatement. Iowa’s Johnathan Banks’ 54-yard kickoff return plus a 15-yard penalty on defense put the Hawkeyes on Northwestern’s 31-yard line. Mark Weisman ran for 26 yards on the drive and capped off the possession with a touchdown.

Things didn’t get much better after that, as Northwestern trails 24-0 after one quarter. Running back Mark Weisman rushed for two touchdowns, moving him third all-time in Iowa history with 28 rushing touchdowns. He had seven carries for 50 yards.

The Northwestern offense struggled mightily to get anything moving. Chicago-native Louis Trinca-Pasat sacked quarterback Trevor Siemian twice. Running back Justin Jackson first carry of the game went for 15 yards but he was stifled the rest of the quarter, running for five yards on the next three carries.

A botched punt by Iowa, their first of the game, put Northwestern at the Hawkeye 18-yard line. The offense will begin the second quarter five yards away from the end zone.